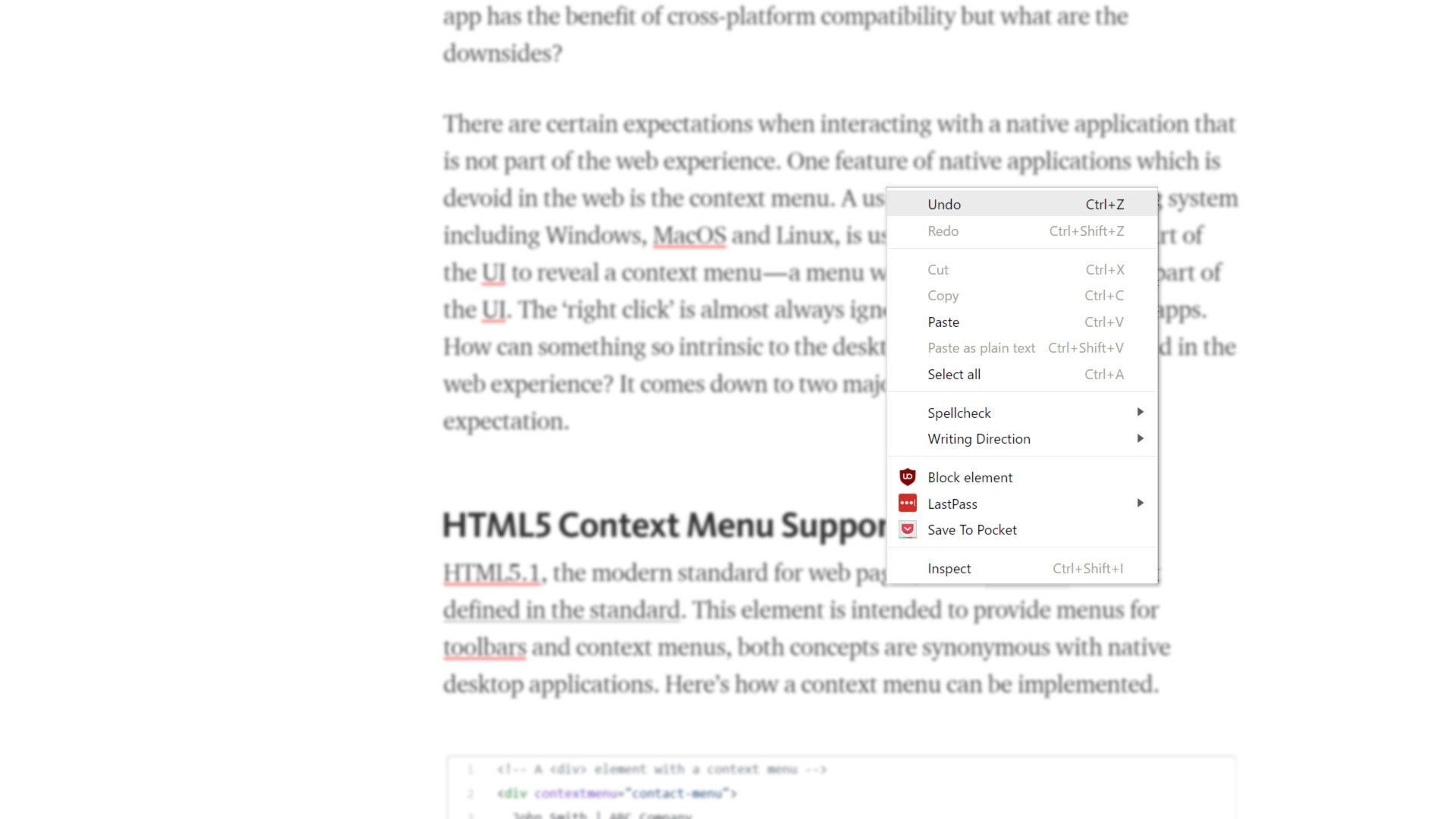 The  web is now the dominant platform and is often the first choice for  developing modern applications. Writing native applications can be a  complicated task, especially when it comes to supporting another  platform; a lot of code needs to be rewritten and the user interface may  need to undergo design changes to make use of features users expect on  that platform. A web app has the benefit of cross-platform compatibility  but what are the downsides?

There  are certain expectations when interacting with a native application  that is not part of the web experience. One feature of native  applications which is devoid in the web is the context menu. A user of  any desktop operating system including Windows, MacOS and Linux, is used  to right clicking on a part of the UI to reveal a context menu — a menu  with actions specific to that part of the UI. The ‘right click’ is  almost always ignored in the context of web apps. How can something so  intrinsic to the desktop experience be so ignored in the web experience?  It comes down to two major drawbacks, support and expectation.

HTML5.1, the modern standard for web pages, has a <menu/> element defined in the standard.  This element is intended to provide menus for toolbars and context  menus, both concepts are synonymous with native desktop applications.  Here’s how a context menu can be implemented.

The following code snippet is based on the code from MDN Web Docs This  is easy to implement and very powerful, there is no additional  scripting required and it works out of the box, the catch? The only  browser that has support for it without enabling ‘Experimental Web  Platform Features’ is Firefox. The only way to implement context menu’s  for browser cross-compatibility on the web, at the time of writing, is  through JavaScript and custom styling the menu. This has the benefit of  being consistent across desktop platforms, a good implementation of this  is a React compatible context menu by vkbansal.  It is possible to start using context menus in your web apps today  although, there is a non-technical drawback. How can we ensure users  will know they are there and use them.

The  web has undergone steady evolution since its inception however some  things have stayed the same. Users expect to interact with a website  with a mouse and keyboard or by a via touch screen. Even if the context  menu element was suddenly supported by all modern browsers, a user will  have to break a habit built up over years of interacting the same way.  There is also another obvious issue when it comes to touch input  devices. There is no ‘right click’, user interaction on touch devices is  very different. The accuracy of the user is reduced significantly,  interact-able elements on a touch screen need to be much larger than an  interface designed for interaction with a precision device such as a  mouse. Context menu implementation is approached differently depending  on platform and the element.

There  a multitude of ways to bring up context sensitive menus in iOS 10,  especially with force touch on newer iOS devices. Whether this is a good  design decision is up for debate and is a story for another time.

List  views in iOS can be swiped to left or right to reveal a context menu.  Continuing the swipe across fully will complete the right-most action.  Tapping on the cursor when editing text will provide a menu specifically  for editing.

Using  force touch on an app icon will reveal a context menu with shortcuts  into the app. When applying force to an item in a list view or a link in  Safari, a preview is shown. Swiping up at this stage will reveal  another context menu.

Some  of these features are available for web developers to make use of but  support can be difficult. On Safari you can make use of the new ontouchforcechange event but the actual display and implementation of a context menu would  have to be built from scratch. So what is the point, is implementing  context menus on the web worth the trouble?

Yes, web apps do need context menus, the complexity of web applications has grown over  the last few years; think about the applications you use on a daily  basis. We interact with social media apps daily, Facebook and Twitter  have grown in complexity and there is now way to hide this complexity.

Everything  that needs to be shown to the user must either be displayed always or  toggled by a ‘left click’ or a ‘hover’. This can lead to cluttered UI  and complicate tasks which should otherwise be straight-forward. It also  reminds the user that they are interacting with a web app, and there  are limitations when compared with native apps.

The  web will continue to evolve as a platform and offer new and exciting  tools to enable us, as designers and developers, to deliver more  delightful experiences to users. Currently, the support for something we  take for granted on native platforms is still severely lacking on the  web. Limited support, inconsistent implementation and the going against  the expectations of the platform are some major hurdles for context  menus on the web today but I am hopeful support will grow in the future.  In the meantime, we have the tools to make a change, albeit with a bit  of hard work and careful consideration; we can close the gap between  native and the web.

Previous
Do I need to worry about Internet Explorer in 2017?
Next
The Wonders of Dangerous CSS